Boom! Studios have released a special app for the ‘Stan Lee’ series of comics. What is interesting is that the app itself has been produced by iVerse Media who are responsible for the IDW and Archie apps. Boom! Studios themselves have their own app, which uses the Comixology Engine. 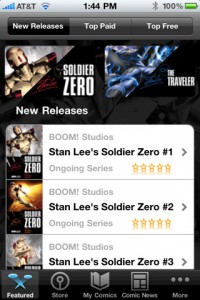 BOOM! Studios, one of the top publishers of graphic novels and comic books, announced today the immediate availability of the new free Stan Lee BOOM! Comics App for iOS mobile devices! The app will showcase the digital versions of legendary comics creator Stan Leeâ€™s superhero comic series, SOLDIER ZERO, THE TRAVELER, and STARBORN. In addition, the titles can be downloaded for iOS through the BOOM! Studios Comics App.

Fans can also download these series through all major digital comics vendors, including ComiXology, Graphic.ly, iVerse, and MyDigitialComics, for desktop (Windows, MacOS) and mobile (iOS, Android) platforms. SOLDIER ZERO, THE TRAVELER, and STARBORN debuted last fall from one of the comic book industries greatest creators, Stan Lee, in association with his company, POW! Entertainment!

Todayâ€™s announcement marks a major foray into the digital comics space by Stan Lee. Lee is a National Medal of Arts Award winner and created the superhero mainstays that populate the House of Ideas, Marvel Comics, including SPIDER-MAN, IRON MAN, THE X-MEN, THE HULK, DR. STRANGE, DAREDEVIL, THE FANTASTIC FOUR, and THOR, among many others.

â€œWhatâ€™s great about releasing this app is that it enables us to bring the joy and wonder of comics to the mobile fan and a whole new generation of readers,â€ said Lee. â€œComics are a medium that transcends age, appealing not only to todayâ€™s young readers, but older ones as well. And by giving them an unprecedented level of access, weâ€™re ensuring that the fantastic stories, characters, and worlds found only in comics will endure for many years to come.â€

The move comes as part of BOOM! Studiosâ€™ aggressive digital comics strategy to offer their entire frontlist and backlist of titles for download across multiple mobile and desktop platforms. Last year, they announced the BOOM! Studios App as well as partnerships with comiXology, Graphic.ly, iVerse, and MyDigitalComics to offer high-resolution, easy-to-use digital versions of BOOM!â€™s most popular titles, including the Eisner and Harvey Award-nominated IRREDEEMABLE, DO ANDROIDS DREAM OF ELECTRIC SHEEP?, and DRACULA: THE COMPANY OF MONSTERS. The digital comics experience gives readers access to BOOM! Studiosâ€™ diverse catalog right at their fingertips. The BOOM! Studios Comics app is available for free download in the iTunes App Store.

â€œWith the easy accessibility of digital comics, weâ€™re excited to be able to turn everyone with a computer, iOS, or an Android device into a lifelong comics fan,â€ says Chip Mosher, marketing director, BOOM! Studios. â€œAnyone whoâ€™s ever been curious to try comics now has the power to read them instantly with just a click of a button. So what better way to experience comics for the first time than by reading all-new series from the master of the medium, Stan Lee!â€

Developed by iVerse Media in association with BOOM! Studios, the all-new Stan Lee BOOM! Comics App features direct access to Leeâ€™s Twitter feed and keeps readers up-to-date on all the latest digital releases from him and BOOM! Studios. Both the Stan Lee BOOM! Comics App and the BOOM! Studios Comics App are available absolutely free in the iTunes App Store. Singles issues of all comics cost $1.99 with a free preview of every first issue of SOLDIER ZERO, THE TRAVELER, and STARBORN available from every vendor.

SOLDIER ZERO debuted in October 2010 written by Paul Cornell (DOCTOR WHO) and drawn by Javier Pina (MANHUNTER, SUPERMAN). Dan Abnet and Andy Lanning currently write the series with the next installment SOLDIER ZERO #8 in stores 6/15/2011.

STARBORN premired in December 2010 written by Chris Roberson (SUPERMAN, iZOMBIE) and drawn by Khary Randolph (THE ADVENTURES OF SPAWN). STARBORN #7 will available in stores 6/8/11.