As a special treat to those who only follow digital, DC have released the first issue of the DCU changing Flashpoint with some extra digital specials: 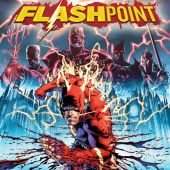 When Barry Allen wakes at his desk, he discovers the world has changed. Family is alive, loved ones are strangers, and close friends are different, gone or worse. It’s a world on the brink of a cataclysmic war–but where are Earth’s Greatest Heroes to stop it?

With this special Digital Exclusive, you get the regular FLASHPOINT title along with pencils and script!