In July 2011 Hype Comics bring a lucky reader the chance to be the person who shoots Bin Laden in the new comic – Seal Team X! 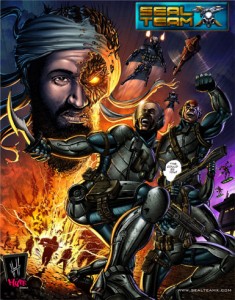 About the Seal team which defeats and kills Osama Bin Laden the title is available on the Kindle, Nook and iPad this July.
Here’s a trailer:

Hype Comics:
Created by veterans from the advertising and comic book industries Hype Comics is committed to bring together leading illustrators, writers, programmers and animators for unique storytelling experiences for e-readers and tablets. â€œWe feel interactive publishing is at the beginning stages of an exciting new way of telling stories with artwork, animations and gaming elements, comic books are the perfect format to explore this medium..â€ says Hype Comics Founder and CEO Scott Ownbey. â€œAll conventional ways of thinking by the print medium are being challenged by interactive publishing. We imagine titles where readers can not only meet, connect, and share on our app enjoying the content but also allow the reader to mash-up and share something entirely different.â€