Admittedly, ‘Burn Notice’ isn’t something I watch, but it’s interesting to see a crossover between the two mediums. Developed by the people from Panelfly, it seems to be getting good feedback. It’s available from the Apple App Store here 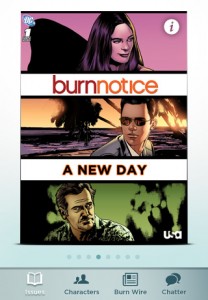 The premiere volume of the new Burn Notice interactive graphic novel is here! “A New Day” follows Michael Westen around the globe as he tracks down the operatives who burned him. With custom illustrations from comic book powerhouse DC Comics, “A New Day” bridges the storylines between seasons 4 and 5 of Burn Notice. Download a new chapter each week to uncover the missing pieces through an original story you won’t find on TV. Along the way, you’ll encounter your favorite characters from the show, and some familiar enemies. And then get closer to the action through enhanced features exclusive to the app:

-Peel back the comic art to reveal the creative stages of sketches, inks, and colors
-Explore special interactive panels in each chapter to hone your spy skills, gather useful intelligence, and enter the Burn Notice world of intrigue
-Pull the latest Burn Notice news from the Burn Wire
-Chat with other fans before, during, and after the show with Character Chatter