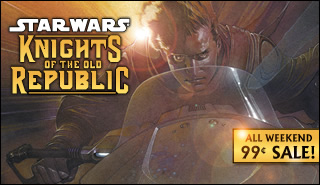 This weeks weekend sale from Dark Horse is the popular STar Wars series:

This weekend is the sale you all have been waiting for:Â Star Wars: Knights of the Old Republic.Â This series is a great starting point for anyone interested in following theÂ Star WarsÂ saga beyond the films. And this weekend you can check out the first 12 issues for only 99 cents each!