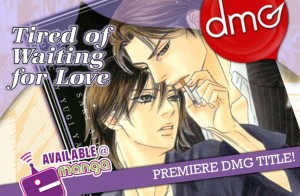 Gardena, CA (August 15, 2011)Â – Digital Manga Inc. is proud to announce the release of its very first manga title,Â Tired of Waiting for Love, under the Digital Manga Guild initiative. This first title launch isÂ in conjunction with Japanese publisher, Taiyo Tosho, and localized by the Kawaii Neko group. You can purchase and read this exciting manga now atÂ eManga.com.

The Digital Manga Guild (DMG), first announced at Yaoi Con 2010, is a collaboration between Digital Manga, Inc., Japanese publishers, and a community of localizers to produce hundreds of manga titles for online distribution . This revolutionary alliance breaks down old systems, allowing a flood of untapped manga content from participating Japanese publishers, to reach the hands of hungry manga fans everywhere. Taiyoh Tosho, a premiere Japanese yaoi publisher and long time licensor to DMPâ€™sÂ JuneÂ imprint, is one of the first publishers to support DMG. Localizing group, Kawaii Neko is one of the first groups activated to work on titles for DMG. You can read more about DMG and Kawaii Neko group in this recent interview atÂ Publisherâ€™s weeklyÂ and at The Digital Manga Guild website.

Tired of Waiting for Love,Â written and illustrated by yaoi fan favorite duo Aida Saki and Yugi Yamada, is about yakuza Kyousuke Sawaragi. Having been sentenced to five years in prison for dealing drugs, he just wants to finish his term and start a normal life. After parole, when he runs into former cellmate Shuuya, heâ€™s in no hurry to renew their acquaintance. Fate seems to have other ideas, the yakuza and Shuuya repeatedly cross his path. Can he really turn his back on all of it, especially if it holds his one chance at finding true love?

For more information about our eManga system and to begin reading right away, visitÂ www.emanga.com.