From today through to September 29th you can get 12 issues for the price of 6 and #0 is free! 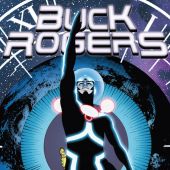 The future begins now! Join us as we present pop culture’s first hero — Buck Rogers! The first man out of timeÃ– the first man to be taken from his present and thrown into the futureÃ– the inspiration for countless heroes, and it all begins here! From the thrilling adventure presented in Dynamite’s introductory issue #0 last month, the creative team of writer Scott Beatty, artist Carlos Rafael and 50/50 cover artists Alex Ross and John Cassaday (Cassaday serves as the regular cover artist for the series) present this all-new issue #1! In the tradition of modern stories for iconic legendary heroes, Buck Rogers is the next BIG hit series from Dynamite! Join us for an all-new presentation of this classic sci-fi hero as the future truly begins now! Hey, we could tell you more, but that would ruin the surprise of the comic adventure!