To go with the latest Dark Horse releases of the Star Wars adaptations they have a new competition! 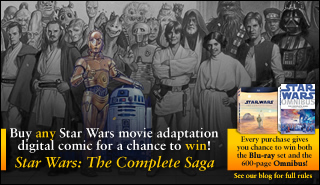 The saga that started it all is coming to digital comics and we have a contest of equally epic proportions!Star Wars Episodes I – VIÂ movie adaptations have been converted to digital comics. Starting today, every time you purchase aÂ Star WarsÂ Episode digital comic, you are automatically entered in a chance to win the completeÂ Star WarsÂ saga on Blu-ray as well as our new print omnibus. Episodes I – III hits digital shelves today, with Episodes IV – VI hitting next week. You can check out ourÂ blog hereÂ for all the fine print. Get your copies now and be entered to win!