A new twist to the weekend sale from Dark Horse! 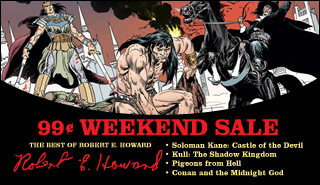 And this weekend’s sale is in honor of none other than Robert E. Howard! The author is most known forConan, but we are also featuring some of his other works, such asÂ Soloman Kane, Kull,Â andÂ Pigeons from Hell.Â Regarded as the father of sword and sorcery, Robert E. Howard had a way of creating legends and making them come to life. Make sure you get your hands on these great comics – only 99 cents an issue this weekend!