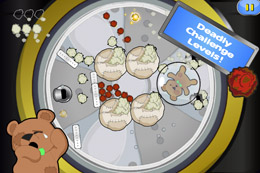 D7 Games from the D7 Studios, creators of app games Stan Leeâ€™s The Traveler and Hamster Busboy, have just released their latest downloadable game, Teddy Tumble, available for iOS and Android devices. So why does GoodEReader.com involve itself in the workings of downloadable game content? Because itâ€™s bringing the world of digital comics with it.

On the surface, Teddy Tumble is a fun-for-all ages mashup of a maze and a ninety-stage multi-level puzzle with an adorable animated teddy bear thrown in. The faster the user spins the washing machine on the touch-screen, the farther up against the wall of the washing machine poor Teddy is flung, all while earning points for gathering detergent, avoiding evil dirt clumps, and hitching a ride on a soap bubble or two. But it is the extra challenge levels that unlock additional content which include six sequential issues of a digital comic book; completing the levels is the only way to continue reading the comics.

â€œThe comic is actually a product of the development teamâ€™s own quirky sense of humor,â€ comments D7 game developer Norman Tran. â€œWe had a concept for bonus content for normal levels, but needed more for our challenge levels. Our artists sketched up the images and one of our developers wrote the accompanying story to give users an added incentive to finish the levels.â€

As the technology behind digital comics advances, such as with the recent release of the DC Comics New 52 re-launch which included day-and-date stamping to allow tablet readers to have same-day access to new releases of the print editions, the door will be flung wide open for indie authors to digitally self-publish their graphic novels to more and more devices. As of yet, graphic novelists still donâ€™t have the same access to simplified electronic publishing options that a typical fiction novelists enjoys.

For now, itâ€™s a hopeful sign that Teddy can help further the cause of bringing even more comic book content to iPads, iPhones, and Android devices because it means that half the battle has been won in terms of a worthwhile comics publishing platform. The next step is to bring that capability to the indie authors whose works are not as readily placed in the hands of the reading fans.