This from Mike Romo over at iFanboy.com

So, itâ€™s been a little over a month since I really tried out digital comics on my iPad. Over this time, I have mentioned a few observations in my articles, and, much to my chagrin, over this time I have become a full convert to digital comics. With this article I wanted to share, hopefully one last time, some thoughts on what digital comics is bringing to fans of the medium. 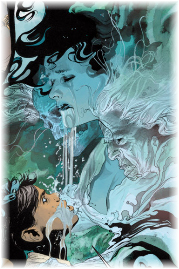 First off, I realize that digital comics are nothing new. Iâ€™ve been reading web comics for years, and have read a few issues of this and that on various platforms, including Graphiclyâ€™s, for awhile now. But when DC decided to go day and date digital with the print versions of its books, I took it as a chance to really begin anew, to really commit to getting my comics digitallyâ€“if the experience was what it had to be. My reasons, by the way, were one of real estateâ€“I just donâ€™t have the room to store all of the comics I have collected over the years. I donâ€™t have the timeâ€“or, more precisely, I donâ€™t want to make the timeâ€“to go through my comics and organize them by title, all nice and neat, only to have to do it all over again after a year or so. Yes, I am aware there are ways around this, but stillâ€“weâ€™re talking about a lot of boxes.

I must also admit to being rather skeptical of digital comics. What about the feel of the paper? What about the artâ€“how would it look? What about the ability to hand them to someone and say, â€œhey, check this out?â€Â  Would digital comics make reading comics more of a private thing, like listening to music in headphones? What about kids? The books in those spinner racks inspired a generation of comic book fans. But a month ago, I just went for it, and here are my thoughts.

Read the rest at