ROK Comics have been building up to this for a while! 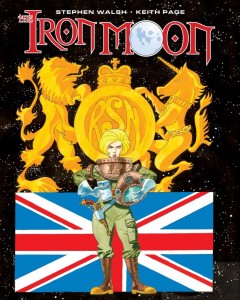 Described as ‘Rorke’s Drift in Space’, The Iron Moon is a fast-paced steampunk-inspired adventure starring no-nonsense adventuress Charlotte Corday and is now available worldwide for iPad from the Apple iTunes store.

In the story, the twentieth century is just around the corner and Queen Victoria is hale and hearty as she heads into the second century of her reign. The British Empire stretches from the white cliffs of Dover to the red skies of Mars. Go-getting men and women of the imperial dominions flock to the colours, eager to make reputations and fortunes in the wilds of high space.

Take lieutenant Charlotte Corday, for instance. Born in what used to be known as France, she has risen to prominence through the ranks of the Royal Space Navy and now finds herself up to her neck in her greatest escapade yet. Watch as she travels to the mysterious Iron Moon! Marvel as she grapples with a conspiracy that may see the galaxy plunged into war! Goggle as she meets new and strange races, both mechanical and biological! Ponder how she manages to put away so many cups of tea! And prepare to have your brain scrambled as she scoops us up and carries us to the very limits of this universe… and into the next!

ROK Comics partnership with Stephen and Keith is one of several new agreements with comics publishers and comic creators. These include the release of an iPad edition of the first issue of the adventure anthology comic STRIP Magazine, published by Print Media Productions, which includes a special ‘prequel’ strip for The Iron Moon.

ROK Comics recently launched its first fully originated comic, TEAM M.O.B.I.L.E. which is initially being published as a weekly web comic (at www.theteammobile.com), followed by roll out on iPad and other devices.

Further iPhone and iPad apps, working with a number of different publishers, are in development.

ROK Comics, part of ROK Global PLC, continues to provide mobile comics content for WAP subscription services across the globe and is currently working with partners in India, Bangladesh and Sri Lanka.

â€¢ A print edition of The Iron Moon is available from Print Media Productions â€“ www.printmediaproductions.com

Praise for The Iron Moon

“Keith Page’s artwork here is a joy and a revelation… In recent years his own style has really developed and The Iron Moon is proof of the dedication and hard work he’s devoted to his craft. Keith has put an amazing amount of detail into the drawings and the book is a rewarding experience… A refreshing change from all the computer coloured pages usually found in comics these days.”
Lew Stringer, Blimey, It’s another Blog About Comics

“… Keith Pageâ€™s imaginative artwork complements and enhances Walshâ€™s writing. It brings the fantastic and bizarre world to life, no mean feat considering some of the things that the script has asked him to do. That he has done everything asked of him… and done it with such style is an achievement that deserves all the plaudits it will get.”
Gordon Robertson, Comic Buzz

Iron Moon writer Stephen Walsh has written multiple volumes of DC Thomson’s Commando Picture Library, as well as the graphic novel The Acid Bath Case (illustrated by Kellie Strom). He co-wrote the feature films How Harry Became A Tree, released in 2001, directed by Goran Paskaljevic and the upcoming Where The Sea Used To Be, directed by Paul Farren. He’s currently working on a documentary about John Ford with the director SÃ© Merry Doyle, as well as preparing further adventures of Charlotte Corday with Keith Page.

Inspired by the great British comics artists of the past such as Frank Hampson, Don Lawrence and Joe Colquhoun, Keith Page has worked full-time in comics and illustration for some 17 years.Â  Subjects have ranged from television-related material such as Thunderbirds, science fiction, and his current war stories of all periods for Commando. A variety of Keith’s work can be seen on www.keithpageukcomicsartist.blogspot.com.

ROK has pioneered many new technologies in the rapidly-evolving mobile and web space, including high quality mass-market Mobile TV (which can be streamed, live and on-demand, over mass-market 2.5G as well as 3G and Wi-Fi) as well as mobile security technologies and multi-language text-to-speech technologies.