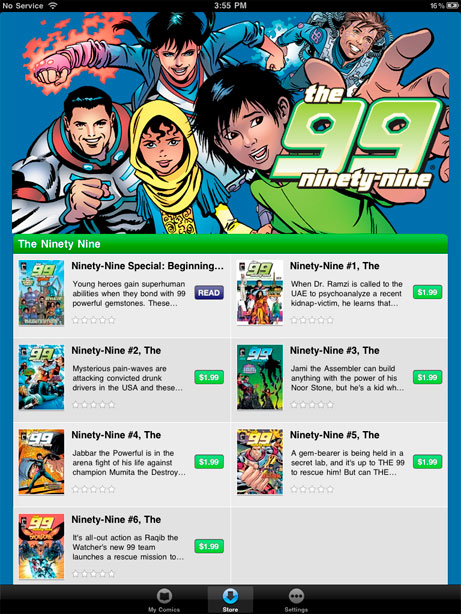 To celebrate the launch, comiXology is offering a FREE introductory issue THE 99 Beginnings, the 72-page story of the origins of THE 99. Also, issue #1 through #6 are now available for sale for only $1.99 an issue on the comiXology platform.Â  Additional issues of THE 99 will be released on a weekly basis with every three issues being collected into a special issue at a special price.

â€œAll of us at comiXology are proud to be a part of bringing THE 99 to a huge new audience through THE 99 iOS app and Webstore,â€ said comiXology co-founder and CEO David Steinberger. â€œThese top notch superhero comic books are great entertainment and at the same time teach lessons of peace and tolerance. Weâ€™re happy that any comic fan with an Apple iOS device or a computer hooked up to the Internet can enjoy these comics any time and any place in the worldâ€

â€œWeâ€™re pleased to partner with comiXology to help bring the message of THE 99 to digital comic fans across the globe,â€ said Dr. Naif Al-Mutawa, Teshkeelâ€™s CEO and creator of THE 99. â€œComiXology has proven itself the market leader in digital comics and is a great fit to bring THE 99 to a whole new audience.â€

Most recently in the news for being the focus of the PBS documentary WHAM! BAM! ISLAM!, THE 99 has been a lightening rod for controversy since creator Dr. Naif Al-Mutawa conceived of the superhero group as a way to spread a much needed message of peace and tolerance to young families throughout the Middle East and the West. Soon after publication began, the comic series was banned for a time in Saudi Arabia and just this past year anti-Islamic fringe groups in the United States helped scuttle the U.S. launch of THE 99 animated television series.

The success of the comic series led to the co-production of an animated television series with media giant Endemol, the worldâ€™s largest syndicator of television programs. While THE 99 looks for a broadcast outlet in the U.S., the television series will debut throughout the rest of the world early in 2012.

In 2010, President Obama, a well-known fan of comics, called THE 99 â€œperhaps the most innovative responseâ€ to Americaâ€™s expanding dialogue with the Muslim world.

About comiXology
Since 2007 comiXology has been developing the technological infrastructure to bring comics into the digital mainstream and expose new audiences to the rich history and culture of the industry. Through partnerships with top comic book publishers including Marvel Comics, DC Comics, IDW Publishing, Archaia Entertainment, BOOM! Studios, Dynamite Entertainment and Image Comics as well as their own mobile and web apps which host over 14,000 digital titles, comiXology has become a leader in digital comic book proliferation. Also focused on creating strong ties with retail stores through its technology solutions, comiXology continues to transform the previously fragmented comic ecosystem into a vibrant and cohesive marketplace.

About Teshkeel Media Group
Teshkeel Media Group (www.teshkeel.com) is the originator of THE 99, a story of modern day superheroes based on Islamic culture and history.Â  THE 99 debuted in 2006 in comic book form and is now an animated television series scheduled for worldwide release in 2012. THE 99 Village theme park opened is Kuwait in 2009.Â  In 2011, THE 99 appeared cape to shoulder with Batman, Superman and Wonder Woman in a six-part comic book crossover. American President Barack Obama praised this historic collaboration as one of the most innovative ways to spread a message of peace and tolerance to the children of the world.

THE 99 have been recognized with major awards and tributes from around the world. Recently, THE 99 and its creator, Dr. Naif Al-Mutawa were the subject of a major documentary film titled WHAM! BAM! ISLAM! on Americaâ€™s PBS network. The film is now available on iTunes.