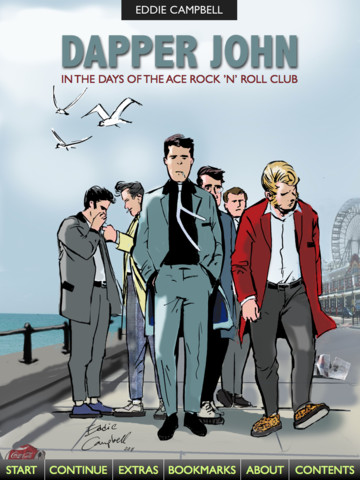 When Alan Moore first saw Eddie Campbellâ€™s In the Days of the Ace Rock â€™nâ€™ Roll ClubÂ in 1982,Â he wrote, â€œEddie Campbell is,Â in my opinion, one of the most interesting talents, amateur or professional,Â working in comicsÂ at the moment.â€ It was the start of a beautiful relationship.

Dapper John was an inspiration for John Constantine from Swamp Thing. And it was with Eddie Campbell that Moore created the magnificent From Hell (later adapted by Hollywood with Johnny Depp in the starring role). Campbell, of course, is now recognised as one of the worldâ€™s most talented comics artists, with his Alec stories included in the Comics Journalâ€™s list of the 100 most important comics published. His graphic novels TheÂ Fate of the Artist, Bacchus,Â andÂ The Playwright have all drawn great critical acclaim.

The Ace Club stories here follow the lives of a group of teddy boys in Southend in the 1970s â€“ characters who could mythologise their walk down the street before they got to the end of it. The stories are a direct precursor to Campbellâ€™s Alec series and are essential reading for any Campbell fan.

Dapper John: In the Days of the Ace Rock â€™nâ€™ Roll Club collects together all the Ace Club stories for the first time and supplements them with:

â€œCampbell is one of the premier cartoonists of his generation.â€ — PUBLISHERS WEEKLY

â€œNo one else in the medium combines emotional truth, literary intelligence, and formal daring with such adroitness and wit.â€ — BOOKLIST

â€œThereâ€™s no artist working in comics today whose body of work I admire more than Eddie Campbellâ€™s.â€ — TOM SPURGEON, THE COMICS REPORTER

â€œDo you need me to tell you how good Eddie Campbell is?â€ — NEIL GAIMAN

On top of that there’s more to come from Panel Nine!

Panel Nine will be publishing more in the coming months. We will have two lines: Â one which publishes some of Â the best comics work already existing work in deluxe digital graphic novels for the iPad, and another which will publish new work that is created with the iPad in mind from the beginning. Our team here in Tokyo has developed what we think is the best graphic novel reader on the market, giving a much better user experience than Comixology and other comics reader platforms.