WANT TO BE IMMORTALISED IN COMICS?
Now you can! ROK Comics (www.rokcomics.com) – publishers of the audio comics Team MOBILE, Houdini Adventures, Master Merlini and more – is offering the chance for you to be drawn into an upcoming ROK Comic as a supporting character! 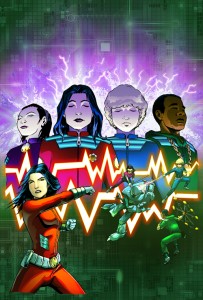 All you have to do is upload to Instagram and hashtag #rokcomics by July 22, 2013.
We’ll scour the entries and pick the best entry, which will then feature in the next available audio comic from our growing list of exciting audio comic titles.
The photo can be funny, heroic, sad, silly or thoughtful – the important thing is that it’s YOU (not your pet!) and a good enough image for our artists to work from!
What are you waiting for? Break out your secret identity gear and upload now!

ABOUT ROK COMICS
ROK Comics publishes a range of audio and other digital comics titles, with Team M.O.B.I.L.E., Houdini Adventures and Master Merlini among several on sale for iPad, iPhone and Android devices – and many more titles in the works.
All ROK Comics titles deliver great comic content, enhanced by a fully authored audio soundtrack and other features that only digital comics can fully exploit, including animation and, in the case of its music comics range, music videos.

Says ROK CEO Jonathan Kendrick: “ROK is pioneering the creation and delivery of original audio comic books across a range of new titles and we are delighted to be bringing comic books to life in this dynamic way via the latest technologies.”

Sales of digital comics are growing rapidly, but many are simply re-formats of existing print titles which fail to take advantage of the opportunities offered by digital devices. ROK has embraced the new medium head on, delivering not just great comics but extras that will appeal to all ages now
well used in the potential of modern media.

“With all the extras, we wanted to complement the comic storytelling that make a comic a comic,”says editor John Freeman, “but added new elements that will give the stories even greater appeal.“We’re hoping our carefully-created titles will appeal outside of comic fandom. We’ve had feedback from parents who tell us our audio comics are a great help with children coming to grips with learning to read, for example. “

Team M.O.B.I.L.E.
An ongoing adventure comic, Team M.O.B.I.L.E. centres on the story of teenagers recruited into a secret organisation to battle crime, terrorism and other dangers – some stranger than others. The series was created by Jonathan Kendrick and features art by Andrew Chiu.
Houdini Adventures
An ongoing adventure comic recounting all-new adventures of the world’s greatest escape artist. Written by magician Jamie Allan Nicklin and composer and script writer Simon Wheeler, the launch issue features art by the highly-regarded Spanish artists Rafael Broseta and David
Belmonte. The comic includes exclusive videos revealing magician’s secrets – some included for free, some
offered as in-app purchase.
Titles also on sale now include several audio “bio comics” including The Beatles Story, an eight issue limited digital series collecting, in full, the stunning creator-owned comic co-created by Angus Allan and Arthur Ranson, which will include rare video of the Beatles.
Rok has also published bio comics of British music acts ZeZi, 2012 X-Factor favourite Joe Whelan and OG Niki – and an action adventure-oriented mini comic starring British rapper Rick Fury.
• Check out www.rokcomics.com for more information!
Title in Production include:
• The Elvis Story, an eight-issue limited digital series by Angus Allan and Arthur Ranson telling revealing the legend of the King, never re-published since its first appearance in British comic Look-In in the 1980s
• My Favorite Martian Collecting the My Favorite Martian comics by Bill Titcombe from British comic TV Century 21, never before seen in the United States, as the show celebrates its 50th Anniversary, in conjunction with Jack Chertok Television
• A new digital comics anthology, in partnership with Markosia Enterprises, launching later in 2013
• Banned Across the Universe… In space, no-one can hear you sing – unless you pretend you’re someone famous, and probably dead! An ongoing action-humour strip drawn by Kev Levell
• Ex Astris, an amazing science fiction comic set in the far future on an Earth transformed by alien intervention and environmental disaster, by Bill Storie
• Visit ROK Comics at: www.rokcomics.com