IDW Publishing have released this weeks digital comics available online, on iOS and Android – don’t forget that some are available on the Madefire app too! 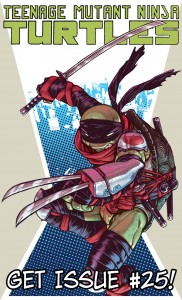