DC Comics have released this weeks digital comics available online, on iOS and Android. The spotlight this week is Justice League of America #11 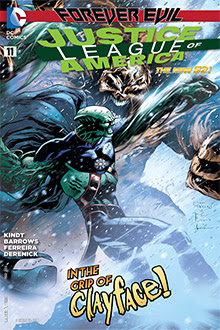 A FOREVER EVIL tie-in! Survivors Martian Manhunter and Stargirl make a perilous trek across a Super-Villain occupied United States. Their first stop may be the last as they enter Gotham City and Clayface-occupied territory!