Most of Britain has fallen to an invasion of zombies. There is no
escape from their insatiable appetite for living flesh.
But in Oxford, city of the dreaming spires, an unlikely alliance
between a crew of firefighters and a pair of misfit soldiers has
allowed them to survive.
Now, with the city virtually overrun, it’s time to strike back!!

From Simon Bisley & Alan Grant (Lobo, Judge Dredd/Batman: Judgement on Gotham) from Berserker Comics brings you a new look at Zombies and the dead. Â 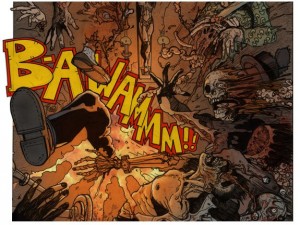 This is a more adult comic which gives a more up close and personal feel of the zombie infestation. The story is laced between personal
accounts of the firemen and the soldiers in the issue and TV reports showing how to recognise and destroy Zombies (including a practable demonstration by Richard & Judy!)Â

I found this really enjoyable and if you want a break from undead lanterns (Blackest Night) and undead mutants (Necrosha) this may be for you!Â

Cheers to the fellas at Geek Syndicate for the tip!