Volume 3: Atomic Robo and the Shadow From Beyond Time deals with Atomic Robo fighting against creatures based on Lovecraftian horror. It is set to take place at different time periods like Volume 1, but with each issue connected like Volume 2.

It seems to me that all Atomic Robo titles are to be long!
‘Horsefeathers’
The Shadow From Beyond Time starts out as a pretty standard fair, but quickly degenerates into a typical Robo battle.
That’s all in issue 1. You would happily read issue 1, with it’s cliffhanger and start on issue 2â€¦
That’s when it gets weird.
It’s only until the end of issue 4 that you realise that there has been a point to what you believe is 4 issues of Robo fighting the ‘Shadow’
If you get that far you get your reward it just goes a long way. 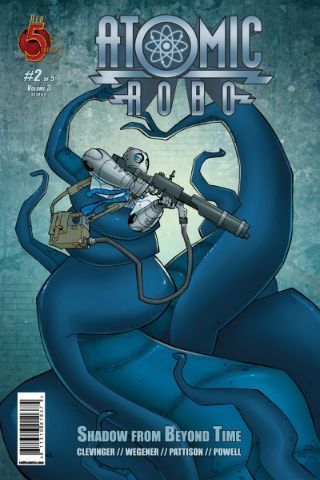