The AXE COP saga began on a Christmas visit to see my family. My Father, a man with very healthy loins, has managed to produce a variety of children, ranging from me, a 29 year old comic book artist, to my 5 year old brother Malachai, a 5 year old boy genius, with four other siblings in between. During the visit Malchai was running around with his toy fireman axe and he said he was playing â€œAxe Cop.â€ He asked me to play with him, and I asked what my weapon wasâ€¦ so he brought me a toy flute (actually a recorder). I told him I would rather be Axe Cop then Flute Cop, and he seemed just fine with being Flute Cop. The story that followed became more and more brilliant, until I couldnâ€™t contain myself and I had to draw the whole thing into a one page comic. 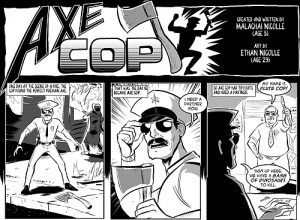 How can this comic not be fun?
Dinasaur Cop becomes Avacado Cop. Then he gains a magic horn and becomes Uni-Avacado Cop! With art to match the manic and fun style of the writing this is a fun read.
There is progression here too. It would be interesting to see the writers tastes change as he grows older (as 5 year olds do!

The writing process is basically just me quizzing Malachai as he develops the saga. Iâ€™ll just try to pry all the details out of him and write them all down until something like a complete little story has been formed. Everything in AXE COP started in Malachaiâ€™s head, all I do is sort it out and draw it.