Moon Girl #1 is available on the comixology app on the iPhone.

“Masked vigilanties wage war on the bourgeoise of 1950’s New York. Our hero breaks free of her neurosis to become more than human”

Written by Tony Trov & Johnny Zito Moon Girl starts off at break neck speed, interspercing some large fight scenes with some plot progression over many threads. Moon Girl is a public domain charcter will find new life in this format. The character seems to be a cross between Black Widow and Grant Morrisons vision of Batman – this is a good thing!
The art is amazing , ‘The Rahzzah’ seems to have found a style which matches the character and the world around her. Bright in places, but still dark in the correct manner when it needs to be.

I see great things in the future of this comic! 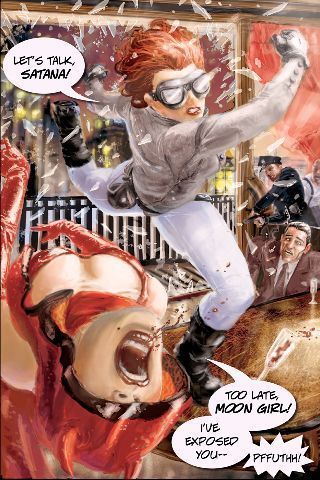