Hawkriders were proud guides and valiant warriors among their people. Now that their tribe is part of the Empire, hawkriders are imperial messengers. Their traditions have been replaced by common rules. Sarnek is a novice hawkrider, who dreams of being a heroic figure one day. Mera is a future clemsera (the future mother of an empire hawks) and is very proud of it. They are sent to Straccio, were they are assigned as postal guards. During their journey, on Sarnek’s decision, they save a stranger. She turns out to be a kleptomaniac condamed for thievery. Sarnek, Mera and the cleptomaniac run into trouble and are imprisoned. They’ll have to learn to listen to each other in order to get out of their present dilemma…and the many more ahead of them. 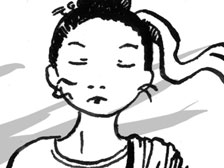 Its nice to see such a loose hand drawn style of art. Not always my cup of tea, but in this comic it does work. I also thought the story was passable.
But…
I don’t know, something didn’t reach out and grab me. I don’t get that feeling that I want to continue reading this one. If I did, it will be a chore!