Gelgun finds himself embroiled in a conflict of ever expanding scope as a pantheon of natural forces and gods vie for dominance. With his queen held hostage, he is forced to collect ancient and bizarre artifacts by the diminutive Mortram. The nefarious summonerâ€™s exact agenda is unclear, but it is certain that whatever he plans bodes ill for humanity. Migna, a young thief, is the first among many unlikely allies to join Gelgun in his quest. Feisty and uncommonly wise for her age, she proves herself to be a valuable asset to the reserved and inexplicably naÃ¯ve Gelgun. Whether her nature as a thief will come into conflict with Gelgunâ€™s quest or not remains to be seen. Along with friends, a host of foes await Gelgun as his ransacking draws the attention of considerably powerful entities. What begins as a straightforward kidnapping soon escalates into an all encompassing war that touches the lives of even the immortals. 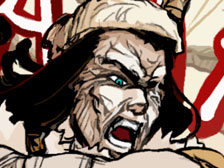 An interesting ‘Slaine’ style concept with a warrior and a thief. I didn’t mind the idea, just the execution wasn’t too good here. There are also aspects of the art that I enjoyed and some that I didn’t.
Too hit n miss for me – 2 1/2 Stars