Netropolis is a city in the not too distant future where man has made robotics an essential part of daily life. Netropolisâ€™ major robot and technology provider is Thorne Industries, who has just hired young prodigy Eli Nelson straight out of college to lead research in their new division. Using his keen intellect and his fascination for insect life, Eli embarked on a technology that fused the working ethic of insects with the strength of machines. These techno-organic insectoid mechanisms were supposed to be a benefit to mankind, using their strength and skills to aid humans in everyday labor, but Thorne Industries head, Aaron Thorne, has other ideas for this new technology. In Thorneâ€™s rash attempt to make the Eliâ€™s machines weapons, an accident occurs causing the many under-developed insectoids to malfunction and break loose. All however, except for one; Eliâ€™s project zero aka Techno Insecto is a special character, and can form a symbiotic bond with Eli that grants the two amazing abilities. Now itâ€™s up to Eli and Techno Insecto to explore their new powers, find and stop all the rampant Insectoids, and keep the dangerous technology out of Thorneâ€™s hands before itâ€™s too late. 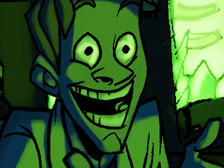 Some great colours here and an interesting premis which could keep me interested for a while! I enjoy the art and the pacing of the story too!

4 Stars & added to my favourites!