“When Los Angeles Detective Lieutenant Lloyd Klimpt finds himself in the middle of a Hollywood mystery that falls way outside the norm, he knows he’s going to need a different kind of help than he’s used to. He finds it in the bizarre form of The Ghoul, a monstrous investigator with a reputation for solving the world’s weirdest crimes. Written and created by Steve Niles (30 Days of Night), with art by industry legend Bernie Wrightson.”

If you are aware of the ’30 Days of night’ series, then you are aware of Niles’s narrative. The story flows in a informative way – as an introductory issue to this mini series from IDW, this issue works.
We set up the partnership and set up the buddy cop friction between the two main characters, we get an idea about the Ghoul and his new partner and their life outside the job!
Our beginnings of the story arc begin really at the end of this issue, giving us our hook for #2
The art is dark, but giving us enough light to stop the eye skipping over it.
An enjoyable comic – 3 1/2 Stars
The Ghoul is available in the iVerse comics app. 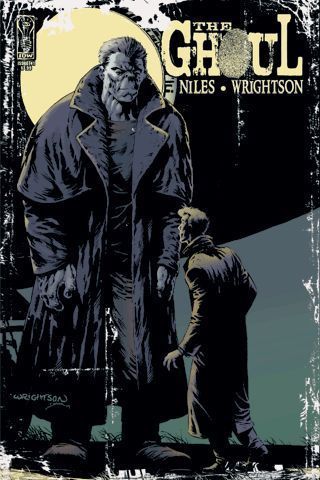