Writer: Chris Roberson
Art By: Robert AdlerA preview of the science-fiction publishing event! Who hunted androids before Rick Deckard? Taking place immediately after World War Terminus ends, the problems with artificial life – androids – become apparent. The government decides they must become targets, hunted down, but who will do the dirty work? Two men are assigned: Malcolm Reed, a ‘special’ human with the power to feel others’ emotions, and Charlie Victor, who’s the perfect man for the job – or is he? Meanwhile Samantha Wu, a Stanford biologist, fights to save the last of the world’s animals. John W. Campbell Award-nominee Chris Roberson writes the prequel to John W. Campbell Memorial Award-winner Philip K. Dick’s Do Androids Dream of Electric Sheep?, one of the greatest science fiction novels ever published!
Price: FREE
Pages: 9
Rating: 9+
Release Date: April 22, 2010 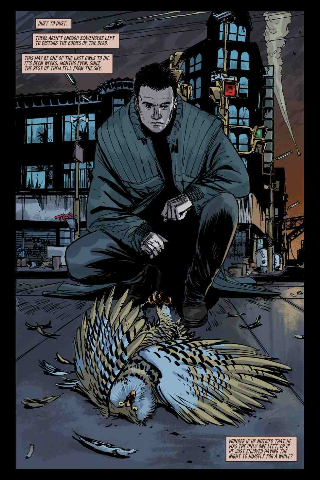 Boom! seem to have the right idea with this preview. It could be considered a gamble for those who may or may not bu the full version of this prequel to ‘Do Androids…’ But after reading this they can get an idea of the tone, story and art of this. This is one thing that the digital/iPhone/Comixology revolution is good for.
The art is grim and gritty, with a street level feel to it. Mirroring the darkness in the book as well as the ‘Blade Runner’ movie. The story for the preview moves on at a good pace, with time for thoughts and times for action. It leaves you with a sutible cliffhanger to entice you to buy the who thing – Good idea!
Its available for free on Comixolgy and then you can use the ‘buy in print’ option to find your nearest LCS to order it!