Writer: Tony Trov & Johnny Zito
Art By: The Rahzzah
Moon Girl is at the mercy of Sugar Plum Fairy and the fate of New York City hangs in the balance. What is the ultimate end game? Revolution! 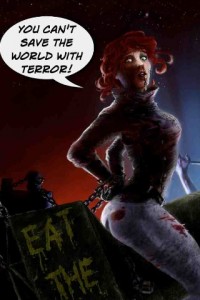 This started out a fun style series, but is rapidly becoming a dark and gritty turn of events. The style of writing reminds me of Grant Morrison in his ‘Batman RIP’ stage and some of the Batman & Robin stuff. There are some dynamic scenes here, which I believe will look magnificent on a printed page!

The art is in a lovely style, soft yet hard in all the right places.

This is a series which needs to be released on a more regular basis, so people don’t get confused though!