Steve Broome, who is a writer/artist has released his own comic for the iPad. Steve has done work for DC and Image and also competed in Zuda Comics. Future Kings is his own comic, which has been released on the iPad for 0.59p. Thats for 24 pages. 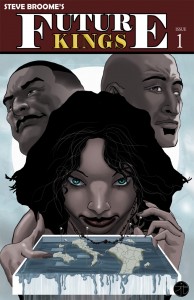 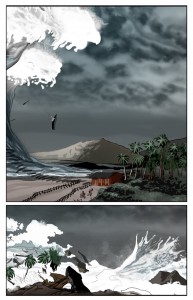 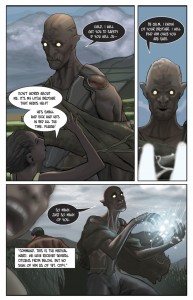 When the worlds only superhero dies, normal citizens try to pick up where he left off. As they attempt to reproduce his powers, are they ready for the decisions science will give them power to make?

I’ll say it once, I’ll say it a thousand times – this is where the digital revolution comes into its own. Allowing talents like Steve to produce and distribute comics of this standard. I would never get a chance to see comics like this if I went to my local comics shop!

Future Kings is a a well written and drawn comic. For the first issue we get straight to the point, and a lot of things happen over the 24 pages, which may seem like a lot. I see great things coming from this series and I would love to see a trade of some of this amazing art!

Although there is a lot going on in this issue, the pacing works really well – we see the death of the hero and, by the reactions and thoughts of others, we discover what sort of a hero he was and how he affected peoples lives. Being a fan of Warren Ellis’s work, I see bits of No Hero and Supergod here – and that makes it even better for me.

Steves art is amazing in how smooth it is. I had a thought that it wouldn’t be the style I usually like, but the feel of the comic, combined with the writing, makes it a perfect fit.

This is why mobile comics are a boon to the industry – hero comics don’t have to be about people in tights flying around to save the day, but also about the effect they have on the people around them and what happens next.

I will be looking forward to the next issue and would highly recommend this one.