Harry Markos of Markosia Enterprises is the man responsible for this remarkable metastasis, swooping in to rescue the book from its period of remission over the summer, in time for a January 2011 re-launch on PSN.

The team behind Cancertown should have nothing but pride about this 6 issue series.

From the story itself to the art, colours, letters and the cover this is an all round, well plotted series. This story would work well as a Vertigo title and Markosia have fund themselves a real gem. 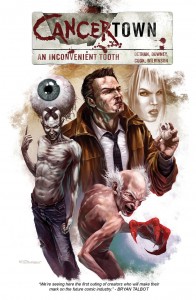 Vince Morley isn’t the sort of protagonist that youÂ find yourself rooting for, but as the series progresses you find yourself bonding with him. Cy Dethan has made this series a well paced series which would be amazing in the print format, but on the screen it keeps you going from one page to another – takinging in the madness of Cancertown that he has created.

Stephen Dowleys pencils fit the mood so well for this story, with some horrifying creatures and some epic scenes which will stay in my head for a long time. These pencils, combined with the colours from Mel Cook create the nightmares that Cancertown has along with the parts of the ‘real’ world in a grim and gritty style. 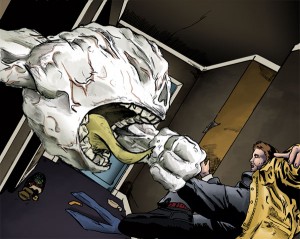 Nic Wilkinson’sÂ  lettering adds to the story, giving the printed words flesh and feeling that I haven’t seen for a long while.

Paul Cartwrights cover creates an immediate impression and lets you know what’s in store for you inside. So much so that my wife, looking over my shoulder, said how amazing it looked – which is high praise indeed. 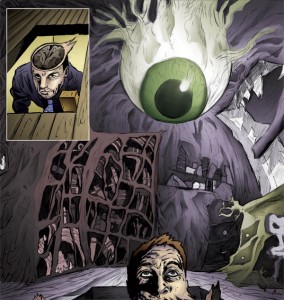 Vince Morley is a man with big problems and a brain tumour like a babyâ€™s fist, living with one foot in a monstrous alternate world he calls Cancertown. When the lost and dispossessed of London start tripping over the same cracks in reality he spends his life avoiding, Morley realises he must confront the residents of Cancertown â€“ and risk finding his place among them.

This is a story about a man who lives in two worlds, and although we are trying to make sense of what is real and what isn’t – heÂ is also making sense of his place in both worlds.

I can’t emphasise enough what an amazing story this is – perhaps its because I’m from te 2000AD generation, but I’m sure that our friends in the US would enjoy this too. For those of you who read Hellblazer and the like – read this now!

Cancertown: An Inconvenient Tooth is available from PSP Comics and Markosia from today – check out the website at www.cancertown.co.uk

Roll on the sequel I say!