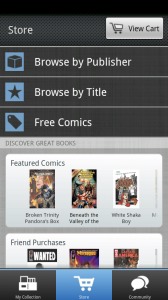 Boulder, CO (February 22, 2011) â€“ Looking for digital comics from the worldâ€™s leading publishers on an Android powered phone or device? Look no further, because today Graphic.ly opens their library of more than 2,000 comics to the 22 Million people worldwide using Android phones or tablets with the release of their Digital Comics application for Googleâ€™s mobile platform.

This milestone release marks Graphiclyâ€™s first entry to the growing and exciting Android marketplace and makes the more than 150 publishers currently available on Graphic.lyâ€™s other applications available to a whole new audience. Publishers available include Marvel Comics (which is only distributed on Android via Graphic.ly), Archaia Entertainment, Archie Comics and BOOM! Studios and many others in offering a wide range of comics and graphic novels to the Android community.

â€œLike our community, we are firm believers in the explosion of the Android marketâ€ said Micah Baldwin, CEO of Graphic.ly. â€œBeing the first to provide Marvel Comics on the Android platform is a perfect example of that belief. This application is only the beginning of the expansion of our relationship with Google, which began as a launch partner with the Chrome Application Store.â€

The new application features a full storefront from which users can purchase comics, as well as the ability to sync with their current Graphic.ly comics library (containing comics purchased from Graphic.lyâ€™s desktop, Web or iOS apps), giving users ultimate freedom to read their comics anywhere on any device. To optimize reading for the handheld devicesâ€™ form factor, the application will support â€˜Graphic.ly Viewâ€™ (a panel-by-panel reading experience) as well as full-page and pinch-to-zoom modes. Further, comic books can be both streamed and downloaded to usersâ€™ phones to ensure reading regardless of usersâ€™ connectivity. In addition to buying and reading comics, the Graphic.ly community is connected through a vibrant social stream, allowing for users to share their activities with friends and find what books are most popular.

Graphic.ly Comics for Android is compatible with devices running version 2.1 and higher and is available for download in the Android Marketplace and at http://graphicly.com/