Archaia Comics have joined the ever expanding list of publishers with the Roddenberry Productions title ‘Days Missing: 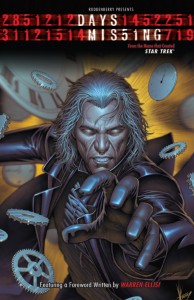 From Roddenberry Productions, the creators ofÂ Star Trek, comes a story about the hidden pages of human history. Since the dawn of time, a being has existed whose interaction and interference with mankind has shaped human development. His powers of time and intellect have allowed him to secretly remove certain critical days from the historical record. Their stories have never been told. Their details have never been documented. Their existence is not remembered. But the occurrences of these days have forever changed the course of humanityâ€™s evolution. These are theÂ Days Missing from our existence, and they are about to be revealedâ€¦

In a press release, PJ Bickett, CEO of Archaia said of the new deal;

“Archaia is committed to working with the best and brightest distributors in the industry to provide our fans with the greatest access to our content. Â When it comes to digital distribution, comiXology ranks among the elite. I have witnessed firsthand the extraordinary impact comiXology has had on how the entire industry views digital, especially with the largest brands.Â  Archaia is excited to be in such great company.”

This is the first title from Archaia and more are promised this year!