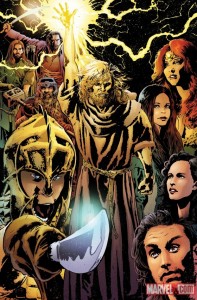 Marvel is proud to announce that the anticipated “Magician: Master” makes its debut exclusively on the Marvel Comics app today! Harvey Award-winning writer Bryan J. Glass, along with breakout artists Tim Seeley and Hugo Petrus, adapts the epic story from master novelist Raymond E. Feist as the fate of Midkemia hangs in the balance. Now three distant friendsâ€”a magician, a warrior and a princeâ€”must reunite for the greatest battle of their lives and possibly make the ultimate sacrifice! This five-part limited series will be released weekly on the Marvel Comics app for iPad, iPhone and iPod touch beginning today.

“‘Magician: Master’ is the first full-length series from Marvel to be published on the Marvel Comics app before arriving in stores,” explained David Gabriel, Senior Vice-President of Sales. “Given both Raymond E. Feist’s worldwide popularity and success of ‘Magician: Apprentice’ and ‘Riftwar,’ ‘Magician: Master’ seemed a natural choice for our first app-exclusive series.”

Feist said, “I am both pleased and excited at having ‘Magician: Master’ selected to be the first full digital exclusive series chosen by Marvel to be available on the Marvel Comics app worldwide. The creative talent involved makes me proud to see what other creative forces can do with my imaginings.”

Can Pug, Tomas and Arutha come together to save Crydee one more time? Or will the mighty kingdom fall? Find out in “Magician: Master,” available now on the Marvel Comics app and with new chapters on-sale weekly!