This time with added X-Force:

Cyclops forcibly sends X-Force into the timestream in pursuit ofÂ Cable andÂ Hope, cutting their operation against theÂ Leper Queen short in spite ofÂ Wolverine’sprotests. X-Force arrives in the year 2973, with 32.5 hours to complete their mission before their time-travel devices accelerate their biology and kill them.Â Elixirremoves his time-band, but mysteriously does not return to the present. AsÂ Vanisher discovers his teleportation powers also don’t work, he is shot by a sniper, who is revealed to be the futureÂ Deadpool. X-Force takes Deadpool with them in search for Cable, whomÂ X-23 tracks to the old United Nations building. Wolverine makes his way inside and finds Hope, before being held at gunpoint by Cable. When the rest of the team finds them, Cable tells X-Force they’ve walked into a trap, and shows them the celestial fortress ofÂ Apocalypse in the distance… 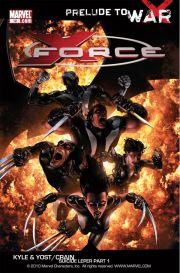