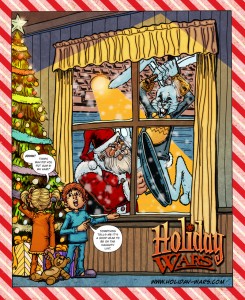 â€œâ€˜Holiday Warsâ€™ is the little webcomic that could,â€ says Michael DeVito, co-publisher of Th3rd World Studios. â€œTrying to sell the concept of Holidays being living breathing entities is hard, but luckily the story struck a chord with readers and has become one of our most read webcomics.â€

In the world of â€œHoliday Wars,â€ the relative power and longevity of the Holidays is always changing with the cultural tide. Realizing this, The Easter Bunny declares war on the other Holidays in the hopes of gaining the one thing that can guarantee his immortality: The Holiday Spirit. Foreseeing The Bunnyâ€™s betrayal, Santa hides The Holiday Spirit and marks Tegan Cassidy, a human infant, granting her the ability to find it. Sixteen years later it’s up to Tegan to find The Holiday Spirit and to end the war that could possible destroy the world.

â€œI like to tell people that itâ€™s an 80â€™s cartoon with a focus on characters and teen angst,â€ Scott King the creator and writer of â€˜Holiday Warsâ€™ says. â€œI mean sure, we have zombie T-Rexes and flesh eating cupids, but at the end of the day the story is really about Tegan and her journey.â€

The comic launched under the Th3rd World banner on July 15, 2010 and quickly expanded to itâ€™s own site atÂ www.Holiday-Wars.com. Originally the comic updated only twice a week, but became so popular that it expanded to a four-times-a-week update schedule–Monday, Wednesday, Thursday and Friday.

On Thursdays, the comic updates with a spin-off series called “Tales of Holiday’s Past.” The series focuses on short stories starring the supporting cast of the main storyline. Although the regular art team has contributed to “ToHP,” the series is mostly drawn by guest artists from throughout the comic industry.

“The main storyline is Tegan’s story,” King says. “So she was always the priority, and as a result there were mythos things and character things I wanted to do with the other characters and that’s really how ‘ToHP’ was born. It was a way for us to deliver the back story and for me to work with some really talented artists.”

Volume 1 of “Holiday Wars” is set to wrap next May with Volume 2 launching a month later. Also releasing next year will be a prequel novel and a spin-off graphic novel starring the fan favorite character of April Fools.

ABOUT TH3RD WORLD STUDIOS, INC. – Th3rd World Studios is a hands-on print and digital publishing house located in Maryland, specializing in the development of high-quality original and adapted properties spanning a broad spectrum of genres. Th3rd World Studios had its first breakout hit in 2009 with the introductory volume of the acclaimed original series The Stuff of Legend . The series continues to run and will be going into its 3rd volume in the Summer of 2011. Also in development is the highly anticipated adaptation of the NY Times bestselling series The Mortal Instruments, by Cassandra Clare.