From the creator of â€˜Jake The Evil Hareâ€™, new series â€˜Darkfellâ€™ follows the exploits of half-elf protagonist Gladden Darkfell on a quest to find the key to the vault of slain Dragon Torg. With assassins and mages on his tail, this wonâ€™t be a walk in the park. 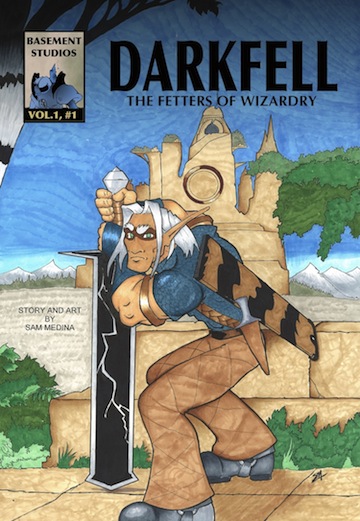 The first issue of this comic is an unusual mix of interesting premise, but odd execution. The artwork, though not typical for this genre, shows promise, but is not always consistent. Action scenes have a sense of kinetic energy and are very easy to follow (although there is a tendency of leaving important details off-screen), while dialogue heavy scenes can feel somewhat disjointed.

In terms of the writing, exposition can be a little rampant, and with the combination of the construction of the setting and the varied use of terminology, throwing a lot of information out in such early stages might leave readers a little overwhelmed.

However, despite some shortcomings, when the story gets going, it becomes a lot easier to become invested and the teasers for future instalments shows that a lot more is bubbling beneath the surface.