This weekend Dark Horse have added a new twist to their weekend sale. This time there are 5 titles up for half price! 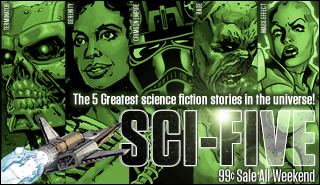 It’s a sci-fi extravaganza this week at Dark Horse Digital. We are crazy for sci-fi, so we are putting stories from five different series on sale this weekend! That’s right: FIVE! They’re some of our favorite sci-fi titles:Star Wars: Crimson Empire, Serenity, Terminator, Rage,Â and evenÂ Mass Effect!Â All weekend long, you will be able to get a handful of different comics from these series for only 99 cents each!

Check them out at Dark Horse Digital