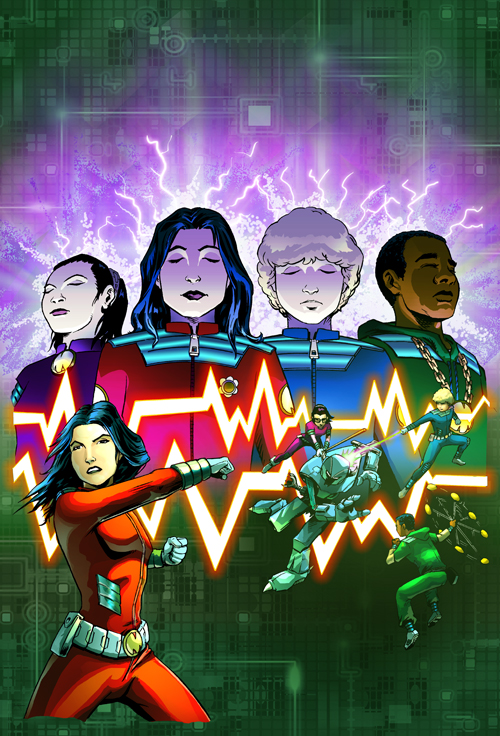 ROK Comics, Britain’s dedicated mobile comics publisher, is preparing to launch its first originated comic title â€“ MISFITS FROM M.O.B.I.L.E. MISFITS FROM M.O.B.I.L.E., drawn by Andrew Chiu, is the first fully originated ROK Comics title and will initially be published as a weekly web comic (at www.misfitsfrommobile.com), followed by roll out on iPad and other devices.

An ongoing adventure comic, MISFITS FROM M.O.B.I.L.E. centres on the story of teenagers recruited into a secret organisation to battle crime, terrorism and other dangers â€“ some stranger than others.And if youâ€™re wondering why a secret organisation would risk such young lives, thereâ€™s a very good reason, and all will be revealed in the coming weeksâ€¦

MISFITS FROM M.O.B.I.L.E. is the creation of ROK founder Jonathan Kendrick, a concept he has been developing for several years. Inspired by a love of James Bond and comics, he came up with the back story for the comic, including its top secret ‘MindMerge’ technology and gadgets.The strip is written by John Freeman from storylines by Jonathan Kendrick, with art by Andrew Chiu. Kris Carter is colouring the title, with Jim Campbell providing lettering and logos.

John Freeman’s credits include work for Marvel, Judge Dredd Megazine and other comics but he’s perhaps better known as an editor, for ROK Comics and titles such as Doctor Who Magazine, Star Trek Magazine, STRIP Magazine and many others. Andrew’s credits include 2000 AD, the mainstay of the British comics industry, DC Comics, Vertigo Comics and ILEX Press.
Kris Carter is a digital colourist, illustrator and web designer whose credits include Transformers and Doctor Who and Jim Campbell is a professional comic-book letterer and occasional artist whose credits are far too numerous to details but suffice to say, he’s worked for pretty much every major British comic publisher and some American companies, too.

ROK Comics has previously published creator-owned and licensed strips for mobile, with three iPhone apps â€“ Ligeia the Vampire by Rodrigo Diaz Ricci, The Mobile Gospel by Rich Diesslin and Madd Science by Steve English. Further iPhone apps, working with a number of different publishers, are in development.ROK Comics, part of ROK Global PLC, continues to provide mobile comics content for WAP subscription services across the globe and is currently working with partners in India, Bangladesh and Sri Lanka.