Over at Salon.com Jim Lee gave an interview about Justice League #1.Â 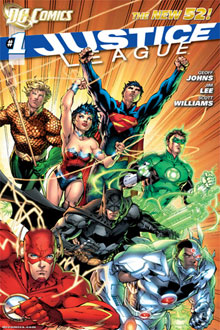 The whole interview is pretty good, but there was some choice digital aspects which are worth reading.

It’s also setting records digitally. I can’t give numbers, but on the first day it set a record for us.

Once you compared the volume of DC’s digital comics sales to dental floss. Is it up to dental tape now?

Itâ€™s too early to say. The goal isnâ€™t to increase one pipeline vs. the other. Everything is designed to increase the overall size of the pie.

How do you see print and digital evolving together either in the short term or long term?

Obviously there are going to be some people who convert from print to digital. They may already have done that or are doing that. When Justice League came out [in digital form], there was already a pirated digital version that had been out for six hours. For me it’s all about giving people who want digital comics a legal alternative. And I think that’s an important decision for the health of our business. At the same time I don’t think you can go digital and say you’re trying to reach new readers without going out to promote this as we have. The TV commercials we’re doing have a pretty extensive buy list of mainstream cable shows. There are a lot of good things happening. We’ve brought a lot of good creators to the books, weâ€™ve promoted the hell out of it and made it as easy to buy the comics as possible, and I think that strategy is paying off.