To go with similar collections of Walking Dead and Invincible?! 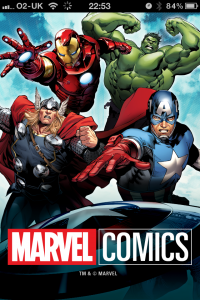 Marvel Comics has announced a new initiative to release digital comics collections on its iOS app.

Readers could previously only download single issues at a time, but will now be able to purchase complete story arcs for some of the company’s most popular titles.

“We’ve heard the fans asking for collections on the app and we’re happy to deliver them today at an unbeatable price,” Marvel senior vice president Peter Phillips explained. “This is only the beginning of some exciting new developments to make the Marvel Comics app an even bigger success.”

SVP of sales David Gabriel said: “From the moment Marvel made history as the first major publisher to enter the digital comics space in 2009, to this momentous announcement today, our goal has always been the same – grow in this industry.

“For this launch we’ve chosen some of our top collections that we’re confident will both resonate with new readers and encourage them to visit their local comic ship via an ad in each collection.”