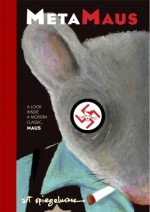 PWCW: Is this your first foray into the digital realm?

SPIEGELMAN: Â I use digits for most of my comics making these days, and for designing the books themselves. The technology that threatens to kill off books as we know themâ€”the â€œphysical book,â€ a new phrase in our languageâ€”is also making the physical book capable of being more beautiful than books have been since the middle ages.

I had a CD-ROM called The Complete Maus that came out back in â€™93 or â€™94. It was pretty amazing, even though I didnâ€™t attend much how it was made, because I didnâ€™t have to. Now I fully appreciate how good a job they did at Voyager, which was a cutting edge company. That was something that I always wanted to reconstruct after I found out A. how useful it was and B. how in-demand it was.

Even now, as I go to lecture, I come across a university every now and then that has someone who keeps their 1999 machine in shape, so that they can use the CD-ROM, because the language it was written in is now more difficult to decode than Aramaic. It couldnâ€™t be further away from something that anyone could use. Originally I was told that it could be mounted on another platform. Thatâ€™s gibberish. That has nothing to do with what can be done. What someone can do is re-write it the same way.

Thereâ€™s a Borges story about the guy who rewrote Don Quixote, word for word. Well, the first half of the DVD is sort of a recapitulation, using some of the same things that were in the first version, including the design architecture, making it available for nowâ€”and itâ€™s all done in state of the art 2002 technology. Because that, for the moment, is still stable, and it will remain stable for the next few years, while computers still have slots to put DVDs in.

The language itâ€™s written in, unlike the language that, say, the iPad is using, is really stable for a long time, which is maybe five years at the most, based on what weâ€™re going through in this highly accelerated era.Â Itâ€™s been written in way that, our best guess is, it can accommodate what comes next like the cloud as ways of disseminating things like this.

But if it wasnâ€™t for this, I wouldnâ€™t have a digital component. I certainly havenâ€™t made comics directly for the iPad like Chris Ware has, recently.

via Art Spiegelman On The Future of the Book.