Devils Due join the melee on the iOS bringing Digital Comics to your iPad, iPhone & iPod!

That’s a lot of apps! 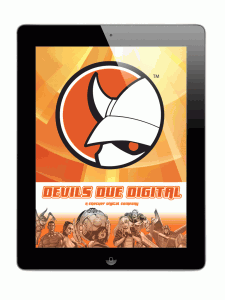 DEVILâ€™S DUE DIGITAL ANOUNCES RELEASE OF OVER 50 IPAD, IPHONE, AND IPOD TOUCH APPS.

Miamisburg, OH. Devilâ€™s Due Digital, Inc. announced today the launch ofÂ over 50 series-based apps in the Apple iOS storefront. This number of apps gives Devil’s Due Digital the largest selection of standalone comic apps in the App Store–representing roughly 1,000 downloadable comics in total.

Devil’s Due Digital is also embarking on a series of creator-based apps, the first spotlighting artist Mike Hoffman (Western Gothic, Octavia). These apps will allow fans to access specific creatorsâ€™ entire libraries via the iOS in-app purchasing system. More creators will be announced in the coming months.

And, just in time for Halloween, Devilâ€™s Due Digital has released a Horror Comics app, available now across the iOS platforms.

Each in-app issue download in every app is priced only at $0.99 and each app features a link to a free sample through the Devilâ€™s Due Digital website, where visitors can also see the companyâ€™s catalogue on Amazon Kindle, Nook, Android, Graphicly, Comixology, and more.

These apps will support the full-scale Devilâ€™s Due Digital app, which will house all of the companyâ€™s titles, due out in early 2012. The apps will also allow readers to choose digital downloads on a variety of storefronts, granting access to titles on whichever device they preferâ€”iPad, Kindle, Nook, Android Device, Mac/PC., etc.

About Devilâ€™s Due Digital