For a while now, I’ve thought things are a little bit too cosy….

IDW are on Comixology and iVerse Media’s Comics+ App…

Image Comics are Day and Date on Graphicly and Comixology.

In a way, I thought it was good – access to all for all. If you wanted a title you just went to the platform that suits you. Personally for me I mainly use Comixology and Comics+ on my iPhone and Graphicly online.

But I don’t have to – I can read some on iVerse, some on Graphicly and some on Comixology. That’s my choice. 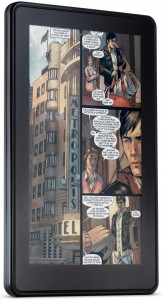 When the Kindle Fire was announced I was excited. A cheap alternative tablet, which may in the next few years be available in the UK….

DC then announced that they had signed a deal with Amazon and graphic novels such as The Watchmen and the DCU Library will be available on the Fire.

“Great” I though “Marvel are lagging a little behind (again), but I’m sure they will be added on soon”

Then reports of Barnes & Noble refusing to stock DC titles filtered through, and I wondered why this was….. 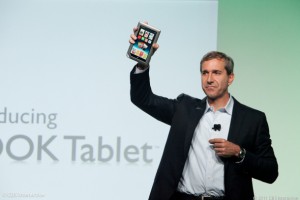 Now, a question come to mind….

With Marvel & DC really battling for sales are we as consumers going to be better off?

Work with me.
Competition in this sense can be good for us. We already getÂ regularÂ Marvel Monday sales, occasional DC ones, Dark Horse weekend sales, and Top Cow Tuesday sales. That’s a lot of sales – a lot of good offers. I got up to date with Image Comics ‘Morning Glories’ after missing out on a few. I’ll be paying full price for the rest.
Want to introduce readers to a new(ish) or older character? Put a sale on their series!
Promote a movie/TV Show with a sale!
There’s many ways that can work!
What about creative – when people don’t enjoy, or get board of a title they don’t buy. This tightens up the creative reigns, but digital does add theÂ benefitsÂ of a trial series.
This morning IÂ receivedÂ the press release from Markosia about a new print release – The Indifference Engine – This was available digitally on PSP, and is now available on Graphicly and Comixology.
Now, would it have had a print release if Markosia had found it didn’t sell digitally?
I doubt it.
I know it’s a very good title, and enjoyed it – I reviewed it and I bought it, I recommended it to others too!
Now you can read it in print.
This is what I call a GOOD THING

Yes, I think we are going to be better off – comics areÂ accessible, people know they’re not just capes and tights – you only need to look at app sales for that.
Walking Dead on TV, people in ‘V’ masks and films like 300 and Sin City have changed people’s perception.
We’re in for a ride as Marvel and DC fight it out, while the others – Boom!, Image, Dark Horse, IDW, Dynamite and more can also get in on the action.
Watch this space!