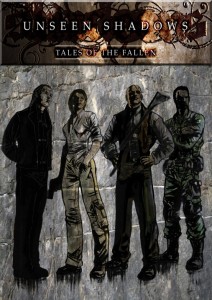 Adapted from â€˜Fallen Heroesâ€™, a novel be Barry Nugent, â€˜Tales of the Fallenâ€™ is a compilation of four stories following the exploits of four â€˜murderers, martyrs and mercenaries in the no-manâ€™s-land between adventure and crusade.â€™

Utilizing an entire team of writers and artists, â€˜Tales of the Fallenâ€™ is visually diverse and an interesting journey to experience. Each story feels as if it plays to the individual teamsâ€™ creative strengths and there is a level of excitement in seeing such a showcase. The art tends to be raw and even a little rough around the edges, but with the tone and subject matters presented in the narrative, it definitely works to its advantage.

In terms of the story, it certainly plays well into the drama and action territory. Stories tend to move between drama, action, war and even some unexpected fantasy, and although not to everyoneâ€™s taste, they were never boring. However, as this graphic novel is based upon the characters of â€˜Fallen Heroesâ€™, the entire compilation acts as a companion piece rather than a standalone feature. The writing genuinely feels coherent to new readers, and as a collection of short stories, it works very well, but the ideas and characters within may have more of an impact to those more familiar with the construction and rules of the world presented. Fortunately, the novel and a graphic novel adaptation are available, so those interested have a starting place.

All in all, â€˜Tales of the Fallenâ€™ is an interesting collection. Fans of action and war movies will probably find something to like here- although it may be best to seek out the other materials in the franchise to add that little extra value.

â€˜Tales of the Fallenâ€™ is published by Unseen Shadows and is available through Graphicly and Oxi Comixs.