I got two digital comics from Marvel Comics and they are two of my favorite titles from them! Daredevil by Mark Waid and X-Men:Legacy by Si Spurrier! 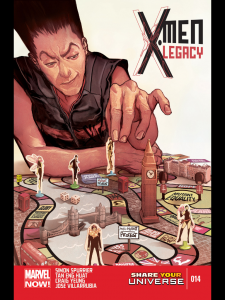 X-Men: Legacy #14 finishes of Legion’s adventures with the British mutants and give a nice role to favorite Pete Wisdom. As per what is becoming the norm for this series, we are left second guessing Legion’s plans! This was a well thought out issue with some nice pieces and ideas – ones that could be built upon at a later date. The final threat/cliffhanger at the end was a nice touch though! I like the addition of Britain – and not just because it’s nice to see us get a mention every so often, but to see the world outside the US. It looks like we’re going to see more as well. There are some excellent art touches here, with the realities and and the ‘holo-decking’ too. It all works out well for most…. 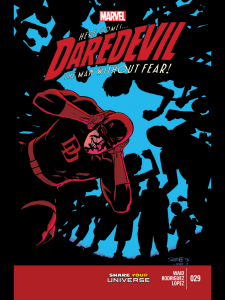 In Daredevil #29, what started off as what I thought of as a 2-issue story, looks to be turning into something bigger. I like how the story was put together here, with the feeling of something small (for Daredevil) but ending with something bigger – both in the next issue and in the overall world of Daredevil. There’s a claustrophobic feel to the story – mainly based in the court house, in addition to the ‘who to trust’ feel about it all. The art and the story both give that feeling and this continues to be an excellent series!