The spotlight this week is G.I. Joe: Special Missions 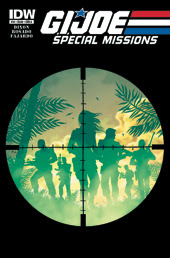 When the Special Missions convoy faces a surprise attack from Cobra troopers and a dangerous sniper, it’s up to Low Light—G.I. Joe’s own long-range specialist—to turn the tables and get the team out in one piece! With a tense script by Chuck Dixon and fantastic art from Will Rosado, you won’t wanna miss the final mission of the Special Missions team!