The pigs decide to build the “ultimate” fortress but can they muster up enough brainpower to find new ways to stop the Angry Birds? 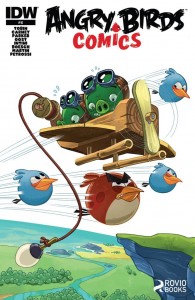 We know where we stand now with these comics, but the Angry Birds comics still find a way to make me smile. We’ve got four mini stories here covering the Angry Birds and the Pigs!
The Safest House is the pigs planning on making their home more secure against the birds – the planning looks good, but then they start to think about them!
Red’s scarf is mainly the interaction with the birds – the pigs appear at the end – and is a different pace to the others!Ear Plugs is a single pager and my favourite of the lot – maybe because I have kids!
Finally a single page of the pigs working on their royal carriage!
In all some fun timeless comedy with characters you can identify quickly and get on reading!