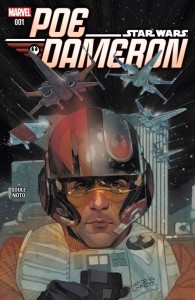 AN ALL-NEW ONGOING SERIES SPINNING OUT OF STAR WARS: THE FORCE AWAKENS! Poe Dameron, former Republic flyer turned Resistance fighter, is the best pilot in the galaxy. Hand-picked for the resistance by General Leia Organa to lead a squadron on a top secret and vital mission…Poe sets off investigating sites of historical importance to the Force. Revealing backstory leading directly into the holidays’ greatest adventure, follow Poe and his X-Wing squadron on covert missions against the First Order. 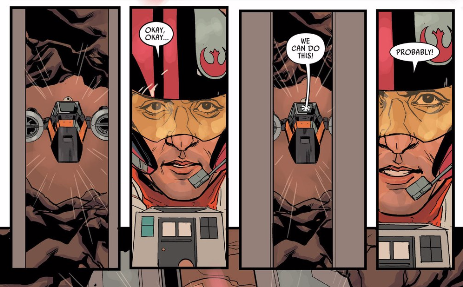 The issue in itself isn’t bad, we get the set up to the mission from [easyazon_link identifier=”0785193170″ locale=”UK” tag=”3milyea-21″]Princess Leia[/easyazon_link] and a look at the team that Poe gets together. We get some small chit-chat between them to get an idea about them too! Poe is searching for someone (from Episode VII) and we get a closer look into how long and difficult that mission is to be. We also get an interesting opinion on [easyazon_link identifier=”B01BKT8KEW” locale=”UK” tag=”3milyea-21″]the First Order[/easyazon_link] – one which may come back to bite Poe!