‘Voltron’ is a 5 issue mini series by Devil’s Due, based on the animated series.
This is a perfect lead in series, which introduces you to the main characters and the universe they live in.
I have to admit that I thought it was going to be like Power Rangers, but no.
What we get is reasonably basic stuff – evil empire (The Drules), plucky rebels and a mismatch of heroes.
There is a reason why this basis is used, when done well it works. And it works here too.
Dan Jolley gives us a story with a beginning, middle and end -but still leaves it open enough for an ongoing or another mini series.
Clint Hillinski & Mike Norton’s art work well in the planetary setting, although perhaps not in space.
Clayton Brown supplies some crisp inks which work well in the story and Brett Smith’s colours.
This is a series which has encouraged me to buy the ongoing (both are available on the comixology app) 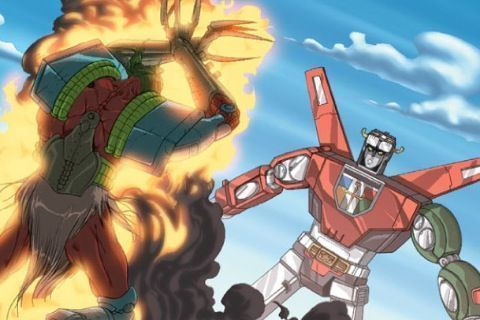