Box 13 #12 is the penultimate issue of this fast paced series. We join the action as the power of the boxes has caused Dan to escape with a gun to the roof! Olivia shows her resourcefulness in stopping him from going gun happy in the crowd below!.
David Gallaher has crafted a story which suits the iPhone format on Comixology, while still giving nothing away in terms of the story. We are taken from place to place at such a pace, we cannot catch our breath.
This story is due to be released as a trade at the conclusion of the story, and I think it would make an admirable addition to anyone’s shelf.
Steve Ellis’s art adds to the theme and style of the writing and they all come together brilliantly.
Roll on #13!! 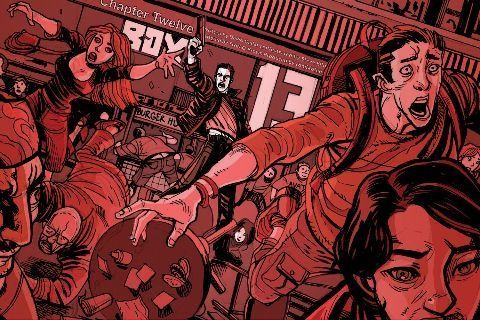