Meet Trildok, demonic spawn of the abyss and harbinger of doom to all mankind. For centuries, Trildok has waged war against humanity, only to be stopped by his eternal arch-foe: the immortal hero known as Rangar. But now, with victory finally within his grasp, Trildok finds himself thwarted by an entirely new foe: manic depression. Personal problems have sent the demon spiraling into a quagmire of self-help books, internet dating, and comfort food. One man knows the source of Trildokâ€™s woes, but is helping the demon condemning the future of mankind? And is a creature born of hellfire even capable of finding true happiness? The answer may be found someday but, for the time being, Mr. Trildok sings the blues. 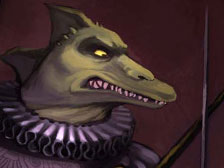 At first glance I didn’t want to like this comic – page one put me off, but as I got into it, I really enjoyed it. Until page 8…
The art in this story is really nice – with some fine line work and inks, combined with some great colours and text boxes.
The story on the otherhand was not to my liking. Page one I can get over – on second reading it makes a great introduction. Page eight on the other hand let me down – I get the feeling of predictability come over me, the story could work, just with tweeks.
Sorry – not my thing!
2 Stars